What is sleep apnea? — Sleep apnea is a condition that makes you stop breathing for short periods while you are asleep. There are 2 types of sleep apnea. One is called “obstructive sleep apnea,” and the other is called “central sleep apnea.”

People with sleep apnea do not know that they stop breathing when they are asleep. But they do sometimes wake up startled or gasping for breath. They also often hear from loved ones that they snore. Click here to take a STOP-Bang assessment to see if you're at risk for sleep apnea. 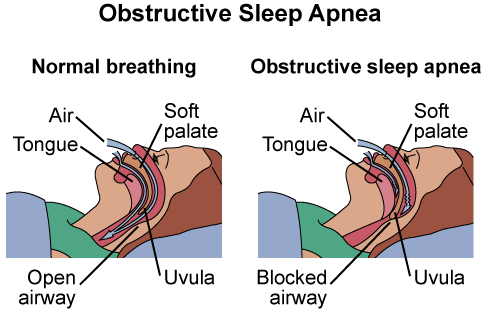 Insomnia sufferers frequently wake up during the night or are unable to fall asleep.

This vibration of tissue in a partially obstructed airway results in sleep disruption and abnormal breathing and can harm your overall health.

A neurological condition that causes sleep attacks during the daytime.

More common in children, these sleep disorders result in the arousal or agitation of the sufferer and causes unusual behavior such as sleep walking, sleep terror, nightmares and sleep eating.

People with restless leg syndrome have uncomfortable sensations in their legs (and sometimes arms or other parts of the body) and an irresistible urge to move their legs to relieve the sensations. The condition can cause an uncomfortable itchy or burning sensation that could be described as "pins and needles" or "creepy crawly." The sensations are usually worse at rest, especially when lying or sitting. The severity of RLS symptoms ranges from mild to intolerable, and the symptoms and severity can vary. The symptoms are generally worse in the evening and at night. For some people, symptoms may cause severe nightly sleep disruption that can significantly impair their quality of life.